The progress of new and more challenging oil specifications is exciting, because it means performance tests, which thrills the entire AMSOIL technical development team. After over a year of being pushed back, the new API SP and ILSAC GF-6 motor oil specifications finally went into effect May 1. These new specifications are in line with the current challenging specs to make sure the motor oils of today are up to the task of protecting advanced engines.

AMSOIL Signature Series Synthetic Motor Oil achieved exceptional results in one of the new engine tests necessary to meet API SP and ILSAC GF-6 requirements–the Sequence IIIH Test. That’s only part of the story—take a look at how the whole thing happened.

Oil being pushed to its breaking point 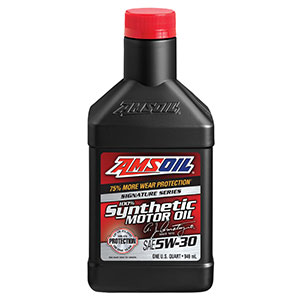 The Sequence IIIH test is formulated to measure growth in viscosity and how clean pistons are—two important aspects of motor oil performance. The test puts the oil through a grueling 90 hours of use at 304ºF (151ºC) in a Chrysler engine; a lot hotter than normal temperature of operation, to really test the oil. The purpose of this test is to separate the protective oils from those that can’t under these extreme conditions that the smaller, hotter-running turbocharged engines of today pose. It aims to intentionally push oil to its breaking point to see if it still does its job.

Immediately upon test availability, Signature Series were sent to an independent lab that concentrates on motor oil testing from several different manufacturers. Their lab technicians test oil all day and each day, so they’re used to testing average oils that just scrape by passing the performance tests, so they were excited to learn AMSOIL Signature Series was to be tested. Many of these techs use AMSOIL products themselves, so were curious about the results. Long story short, after 90 hours, there was not much difference in viscosity (0.1%) or cleanliness of pistons—the test didn’t present a challenge to Signature Series. Shop AMSOIL Synthetic Motor Oil.

Next, we asked the lab to rebuild the engine and perform the test this time with the same oil, but one important change: doubling the test time to 180 hours. As we reached the end of the test, the lab manager said many techs were lined up in the test cell to watch the test (and some were taking photos).

After the test, the viscosity of the oil was measured and the cleanliness of the pistons was determined. Even after doubling the time length of the industry-standard test, AMSOIL Signature Series resisted thickening of oil to 49.6%, just half the allowable limit of 100% for the 90-hour test. The pistons were also 40% cleaner than with other oils. Suffice it to say, the lab techs were awestruck.

So how did the oil attain these exceptional results?

We begin with the highest-quality synthetic base oils, which inherently stand up well to extreme heat and fight chemical break down in such circumstances. Next, the addition of an excellently tuned package of additives will boost and complement the performance of the base oils.

Higher levels of active detergent and dispersant additives will assist in keeping contaminants at a reasonable level and keeping engine parts clean. First-rate base oils with the correct levels of anti-oxidant additives will help regulate viscosity, allowing the oil to remain in grade even after lengthy exposure to ruthless heat.

This combination makes for premium engine protection in the taxing engines of today. Signature Series defends vital elements against wear in the most extreme conditions, allowing drivers peace of mind and giving them the ability and assurance to even extend drain intervals if they want.

Our objective is to deliver motor fans the number one motor oil in the market, and our team is always over the moon when we have the test results to back the claim. It’s not always simple to impress the professionals who test oil every day, but Signature Series did just that.