Before you determine whether to purchase a 2-stroke or a 4-stroke dirt bike, consider how you will be riding the bike. For many, that means riding on single-track trails and competing occasionally in hare scrambles near home, but sometimes you will also be riding on fields or gravel roads near home. Riding dirt bikes is a passion for many, but not their occupation. For others, however, it can mean Motocross or Supercross races. Advancing their racing career is a goal for some riders.

Benefits of a 4-stroke dirt bike

A 450-cc four-stroke dirt bike, such as a Honda CRF450 or Kawasaki KX450, is going to be the number one option for riders competing in certified races.

4-strokes create large amounts of power and torque despite their engines being pretty small. Professional dirt bike riders on a 4-stroke can easily execute a complex triple jump with a simple 10-foot run-up. Both skill and powerful stump-pulling torque only a 4-stroke dirt bike offers are required to complete such a feat.

Because of the nature of their design, 4-strokes dirt bikes produce less exhaust than 2-strokes. A 2-stroke’s design leads to oil burning during combustion, which leads to increased smoke and emissions (especially if a low-quality oil is used). 250-cc 4-stroke bikes are also popular, especially for first-time dirt bike riders and hobby riders because they’re easier to handle, lighter weight and less expensive. 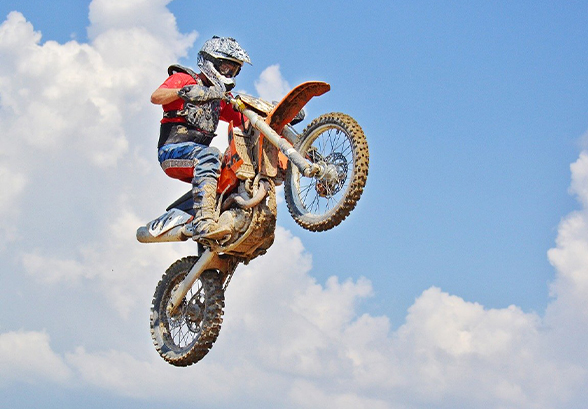 Power and torque like that comes with a price—more money and time spent on upkeep. Generally, a 450-cc 4-stroke creates 50 horsepower from an engine a similar size to a lawnmower engine. This causes lots of stress on a pretty small piston.

To minimize drag and boost power, a 4-stroke dirt bike piston typically has a shorter skirt than you might usually see, and this causes the piston to want to rock back and forth in the cylinder. This can cause wear, which shrinks the piston, and it can even turn sideways and cost thousands in damage repairs.

In addition, most dirt bikes only hold around a quart of oil. One quart is required to handle all the stress of the engine. Revving your bike up to 10,000 rpm on the racetrack increases heat, which leads to faster oil breakdown. Oil sump temperature can reach over 300ºF (149°C), which leads to oil breakdown failing the protect the engine—always resulting in wear. This is why the majority of manufacturers recommend a rebuild of the top end of the end around every 50 hours, which can come up fast especially if you ride a lot. We recommend you plan at least $500 per rebuild.

2-strokes reached their pinnacle of popularity in the 70s and 80s. Pound for pound, they create more power than 4-strokes, due to the nature of how engines work.

The engine draws air/fuel inside the cylinder (intake), compresses it to get it ready for combustion, ignites it via the spark plug to produce the explosion that powersthe piston and, lastly, exhauststhe consumed gases out of the exhaust valve. A 2-stroke engine only completes a single crankshaft revolution to reach all four stages, and a 4-stroke requires two revolutions, so a 2-stroke gives you power with each turn, but a 4-stroke gives you power on every other turn. This natural advantage helps us understand why a 250-cc 2-stroke engine makes more power than a 4-stroke of the same size.

These days, our choice seems simple: get a 2-stroke bike. But it’s not that simple. As we mentioned earlier, 2-stroke engines burn oil during combustion, which increases exhaust emissions; something that didn’t agree with the state of our heightened environmental awareness in the ’70s and ’80s.

Pretty soon, stricter environmental regulations encouraged riders and manufacturers to develop 4-stroke engines, which led to a dip in 2-stroke bike sales. In 1998, the AMA determined that professionals could compete on 450-cc 4-strokes against 250-cc 2-strokes in order to equal the advantages. After the pros switched to 4-strokes, hobby riders and the rest of the public followed suit and 2-stroke sales plummeted.

2-stroke dirt bikes are coming back

2-stroke dirt bikes are finally making a comeback. New technologies have been able to reduce exhaust emissions while increasing power. Though a 2-stroke will never be able to offer the torque of a 4-stroke, they come close enough for the majority of weekend warriors. Older 2-strokes demand revving of engine to make any power, which doesn’t lend itself to steering around tight corners or obstacles on a single-track trail deep in the forest.

Progressions in exhaust-port and power-valve design have successfully allowed us to ride a 2-stroke at lower rpm, which makes them favorable in woodsy areas. 2-stroke bikes also require less maintenance than many 4-strokes, which can save you time and money.

2-strokes fall short when it comes to the stump-pulling low-end torque of a 4-stroke dirt bike, especially a 450. The lack of instant torque once you turn the throttle can impact certain riding techniques. It can also be a shortcoming in a competition.

You need to determine which bike makes sense for your ability and riding style. 4-strokes are recommended for professional racers and serious riders who don’t mind rebuilding nearly every 50 hours for $500.

For hobby riders and beginners, a newer 250-cc 2-stroke offers most of the riding of 4-strokes, with the obvious exception of less torque. 2-strokes are more expensive to maintain. A 250-cc 4-stroke is another good option since it is less expensive, lighter and easier for a beginner to ride.

No matter which bike you choose, use a good oil

Regardless of your answer to the 2-stroke/4-stroke debate, you can benefit greatly from purchasing a quality motor oil.

As discussed, the quart of oil that your 4-stroke engine can hold protects it from wear, lubricating the piston against the cylinder wall and keeping the bearings from wear. In addition, the oil has to be able to stand up to and perform under extreme heat of over 300ºF (149ºC). AMSOIL Synthetic Dirt Bike Oil is the answer for 4-stroke. Its exceptional friction-durability properties lead to minimalclutch slippage, fade and chatter, which gives riders consistent clutch feelduring takeoffs or whenever moving around obstacles.

For those who choose to ride a 2-stroke, we recommend AMSOIL DOMINATOR Synthetic 2-Stroke Racing Oil. It has superior film strength for high-heat and high-rpm motors, an anti-friction formulation for supreme power, it burns cleanly, prevents ring sticking and protects pistons (both coated and non-coated).